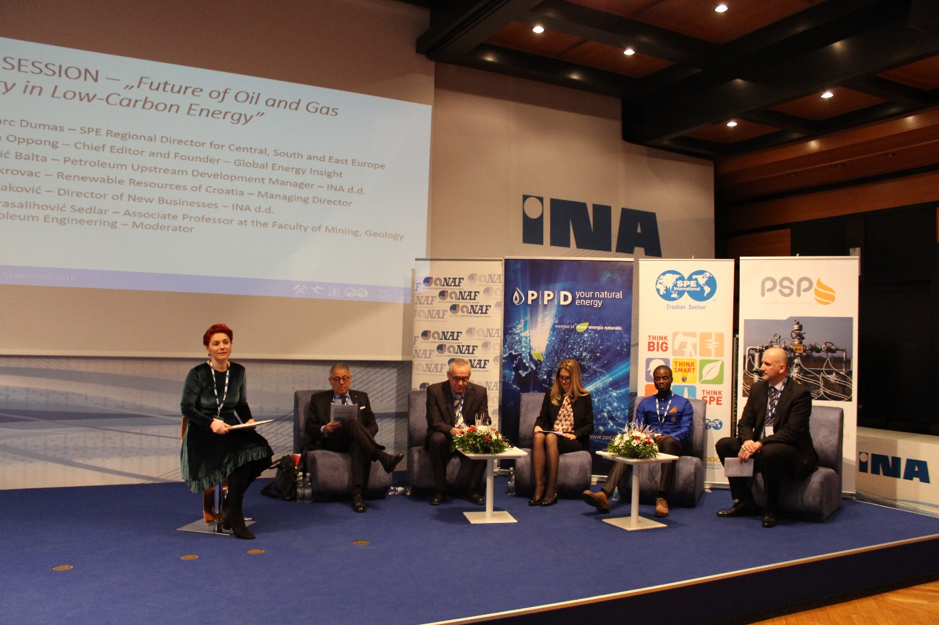 In the beginning of March many students and young professionals from various technical universities across Europe gathered in the capital of Croatia for the 5th annual congress held by the SPE Student Chapter of the University of Zagreb together with the Faculty of Mining, Geology and Petroleum Engineering at the INA headquarters. The congress which focuses on discussing the problems in the oil and gas industry and possible innovations has proven to be a success over the previous years and this year was no exception. The extensive congress program consisted of three days of lectures and panel discussions held by students and distinguished guests from Croatia and other countries with the attendance of several key figures from the oil and gas industry and the Society of Petroleum Engineers.

During the opening ceremony several speeches were held by the noted speakers involved in the organisation of the congress. Jean-Marc Dumas, SPE Regional Director for Central, South and East Europe and Vladislav Brkic, SPE Croatian Section President, Lidia Hrncevic, Vice Dean of the Faculty, Branka Ramijak, State Secretary of Ministry of Science and Education and Darko Markotic, Operative Director of Consumer Services and Retail at INA who outlined the importance of organising such events and, of course, students participation and contribution.

A panel session followed later on focusing on “The Future of the Oil and Gas Industry in Low-Carbon Energy” which provided the students with an interesting insight towards the current changes occurring in the energy sector which can affect their prospective careers. The panel was shared between professionals from the petroleum industry but also by Maja Pokrovac, Managing Director of Renewable Energy Resources of Croatia, leading to an intriguing discussion with the several students and attendees having the opportunity to ask their questions.

Later on the first day the students have been introduced to the Growww Program, which gives an opportunity for fresh graduates to start with their first working experience at INA d.d. This session has been followed by the presentation on an energy sector development in Namibia and Rwanda and two presentations from our Croatian and Hungarian colleagues as a part of the paper contest which also continued during the next days. In the evening a guided tour around the city has been organised which everyone greatly enjoyed despite the rainy weather.

During the second day, the attendees had the pleasure to sit in for a number of lectures on a variety of topics highlighted by Jean-Marc Dumas who emphasised the importance of the E&P’s transition into the digital age with the increasing inclusion of data analysis and intelligent solutions to the challenges faced at this day and age. Another panel session was also held by a number of young professionals from INA from the different departments to provide the students attending with a bigger picture about the professional world in the oil and gas industry. The panel speakers also were extremely open to the questions from the audience that were curious about their different backgrounds to inquire about their careers perspectives. Our MUL fellows Ahmed Elmenshawy and Mohamed Amine Ouarda also presented as a part of the paper contest.

On the final day of the conference, the conference continued not only with lectures from the paper contest candidates but also from Ivana Ivancic from Ivana PeK PPD about the gas balancing in Croatia. The poster contest included the works from students from a wide variety of universities including Anna Kulagina from Montanuniversitaet Leoben followed by the PetroTournament which involved teams from the different universities competing in a series of questions covering technical knowledge from Petroleum Engineering. The Leoben team consisting of the trio Anna Kulagina, Ahmed Elmenshawy and Mohamed Amine Ouarda unfortunately lost in the finals getting the second place. The conference was concluded in the afternoon by a closing ceremony to award the winners in the paper and poster contest with our fellow Mohamed Amine Ouarda receiving the second prize in the paper contest. It was followed by the speeches from the organizers to thank the attendees and the people involved in the success of the student conference.

We would like to thank again the SPE Student Chapter of RGNF for their hospitality and congratulate them for the success of their annual conference and we look forward to seeing you again next year.

Annual student energy congress at the University of Zagreb