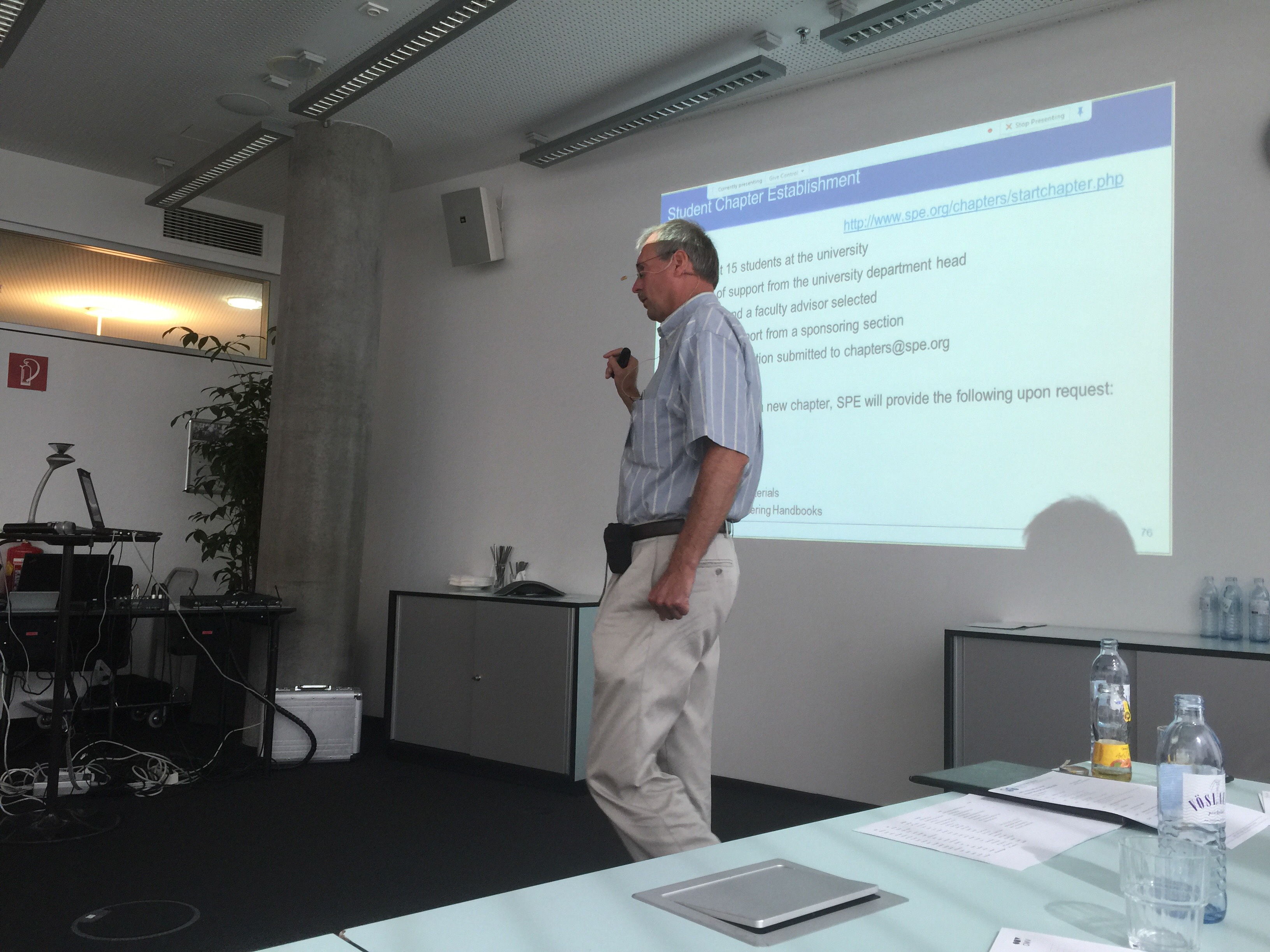 On September 16th the Vienna Basin Section hosted the Regional Section Officers Meeting under the guidance of the Regional Director for South, Central and Eastern Europe, Matthias Meister.

It was attended by representatives of the French, Italian, German, Croatian, Romanian, Polish and Hungarian Sections, as well as by the hosts, the VBS, representatives of two Student Chapters (Zagreb and Leoben), and by Blaine Horner, Staff Liaison Officer for SPE South, Central and Eastern Europe. Various topics were discussed, from questions like where does our industry go (particularly under the current oil price), and operational questions like community engagement, volunteerism and supporting students to questions like how can we reach out to new members and how one can benefit from the membership in SPE.

The session was started with an outlook of the oil price and its impact on the industry. The problems caused by the downturn are enormous, not only for the job situation, but also for organizations like SPE, who currently also suffer from reduced sponsoring, waived membership fees and a loss of members due to people leaving the industry. The key points that we will have to face in the future (and this is a particular challenge for us as the next generation), are a lower oil price for a longer period, where prices about 50$ will be the new normal (as opposed to prices over 80$ a few years back), Big Data and the implication of new technologies, transitioning towards the idea of the “Digital Oil Field”, and a new efficiency in all our operations, from fuel and energy efficiency to responsibly and sustainably dealing with the resources.

A key point was also volunteering, and the benefits of being in SPE: Not only is SPE an international network of upstream professionals, it is also the number one resource for knowledge and technology, be it PetroWiki, OnePetro, the various SPE Textbooks or be it conferences, where we reach out to the oil and gas community in order to disseminate knowledge and technology. As a non-profit organization, SPE relies on member contribution; hence it was a key question to see how the various sections approach their members to make the step ahead, and becoming actively involved in their local SPE branch. While the approaches may be different from section to section, the most significant differences are probably between the philosophies of the professional Sections and the Student Chapters, who find social media their natural habitat, thus using their capabilities more to the limit. Also, they seem to be more open to events that are not strictly technical events but focus more on having fun networking and getting to know new people.

It was also interesting to see how different sections reach out to their younger members, supporting students and young professionals. For example, students at IFP School in France have created an exciting and interesting game called “Reservoir Box”, which was supported by French Section of SPE. In this game, the participants experience the whole lot of problems a company in the E&P business faces, from making technical and financial decisions to dealing with unexpected situations, and most of working in teams and as teams. A link to the very interesting video can be found on the LinkedIn page of SPE France. Representative of the German Section Caroline Kannwischer talked about their take on integrating young professionals, a seemingly difficult task in Germany, where the industry is distributed over the whole country. This is something, where also the Vienna Basin Section has experience in, since it comprises Austria, the Czech Republic and Slovakia, reaching even across 3 countries with three different languages – not to mention the Upper Austrian field office of RAG in Gampern! Despite geographical inconveniences, they are involved in organizing workshops, conferences and even do visits in the major oil towns in order to recruit people and supporting young professionals, and arranging socializing events.

Furthermore, the SPE German Section cooperates with oil companies in order to improve the training of the new generation in the industry, enabling their successful transition from academia to their companies. The representatives of SPE France presenting their section, talking about cooperation with other organizations. Photo Credit: Daniel Hirschl

After lunch, a brainstorming session took place, focusing on the topics “Supporting Members Through a Downturn”, Volunteers, and Social Media. Burning matters to which no unique solution exists, but SPE takes all the input seriously, and working on an improvement to satisfy the needs of their members.

After nearly eight hours of presentations, discussion, brainstorming and small talk, a very fruitful and interesting meeting ended. Thank you to all the participants, not only for participating, but also for traveling to Vienna for this occasion; thank you also for the VBS to organize the meeting and OMV for providing the meeting room and its infrastructure in their head office!